No Wonder Mark Kelly Won’t Speak Out Against Chinese Censorship

If you’ve been wondering why Mark Kelly’s been MIA on the issue of Chinese censorship in the United States, we have your answer.

Just follow the money: it turns out Kelly has financial ties to the Chinese investor at the epicenter of the NBA censorship controversy. Hank Stephenson with the Arizona Capitol Times’ Yellow Sheet has the story: 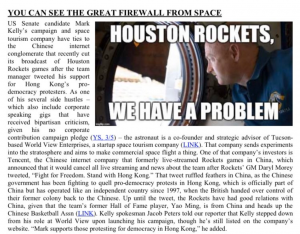 Tencent, the Chinese company who recently announced it would stop airing NBA games in China after a team executive tweeted support for Hong Kong, is a major investor in Mark Kelly’s company, World View Enterprises.

Mark Kelly’s personal financial conflicts continue to dog his campaign. Earlier this year, a series of embarrassing revelations about Kelly’s corporate speaking tour blew a hole in his campaign’s message that he was refusing corporate PAC money for his campaign.

“Mark Kelly’s shameful silence on Chinese censorship shows he is bought and paid for by his Chinese investors. The more threads we pull from Kelly’s shadowy financial web, the clearer his motives become.” -Defend Arizona Spokesman Barrett Marson