Shortly after President Trump tweeted his endorsement of Martha McSally, Kelly sent an email to his supporters with the following plea: 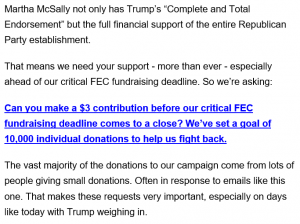 “Mark Kelly should be scared. Once Arizonans learn the truth that Kelly is a hypocrite devoid of answers, they’ll be running away from his candidacy as fast as they can.” – Defend Arizona Spokesman Barrett Marson