Mark Kelly is fond of telling voters he cares about the planet without offering any detail on what that means, or what policies he would support to address this issue he supposedly cares so much about.

Kelly has utilized the issue to raise money – sending multiple email fundraising solicitations and running Facebook advertising (like this one below) telling Congress to “get serious.” 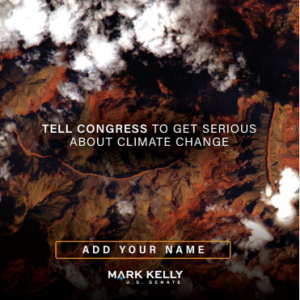 But Kelly has cynically refused to take a position on the Democrats’ signature climate proposal, the Green New Deal.

And in the meantime, he’s been playing both sides – enjoying high-dollar fundraisers thrown by the petroleum industry while raising small-dollar cash by pretending to care about the climate. That’s in addition to continuing his corporate paid speaking tour around the country.

Today, on Earth Day, look for Kelly to use more gauzy language imploring donors to give because he “really cares about the planet.” Just don’t expect him to be honest with voters about how he will address the issue – all while he piles up their ca$h.