Kelly Exposed for Sham Ethics Pledges on Sunday Square Off

In case you missed it, Mark Kelly was on Sunday Square Off with 12 News’ Brahm Resnik this weekend, and boy did it get awkward. Watch for yourself: 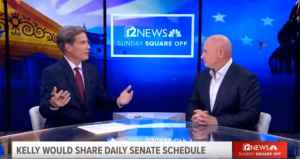 After dismantling Kelly’s argument that fundraisers should not be included in his pledge to publish his schedule “because that’s not part of your official role as a Member of the United States Senate,” Resnik proceeded to tell Kelly in regard to his pledge not to take corporate PAC money: “There is kind of a loophole, however, that allows corporate lobbyists to donate money directly to you.”

Of course, that also happens not to include the tens of thousands of dollars Kelly is raking into his personal bank account *right now* from corporate interests for paid speeches. Kelly admitted to the Arizona Republic earlier this year he would continue giving paid speeches to corporations as a candidate for Senate, an issue that has invited consternation from the left.

“Mark Kelly’s substance-free campaign is merely a collection of feel-good sound bites and toothless political pledges that run counter to who he really is as a person. Behind the pious, consultant-crafted facade is a man who has no qualms taking money from authoritarian regimes, unsavory pyramid marketers, and the very corporate interests he labels toxic to our democracy.” -Defend Arizona Spokesman Barrett Marson